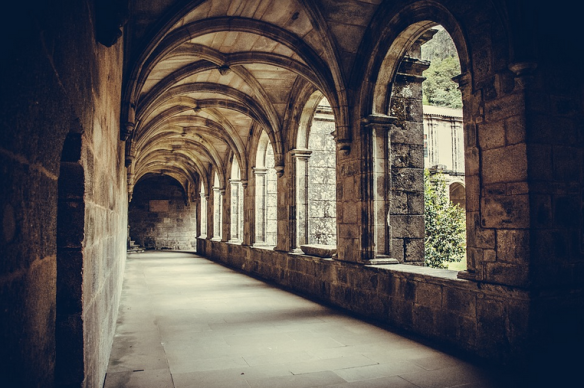 Information about early medieval bread comes from all kinds of unexpected sources. Possibly the least obvious is monastic sign language, but one of the times the Benedictine Rule required monks to keep silent was at meals, so that they could listen to improving readings. That meant that when lists of signs were drawn up, probably first at Cluny in France in the ninth century, they included signs for food, drink and other things a monk might want at table. All the lists share a sign for bread, and many of them also include signs for various fancy kinds of bread, or other baked goods. But the Old English one, possibly originating in Winchester in the tenth century, has only the one basic bread sign. This may just be because the English list is the shortest overall, possibly an abbreviated version of the Latin one from Cluny, but it might also tell us something about monastic dietary provision at the time: perhaps Anglo-Saxon monks just had a really boring diet compared to their continental counterparts.

Most of the fancy baked goods in the lists are fairly obscure: no recipe books survive from the early middle ages, and some of these items can scarcely be found anywhere else in contemporary sources. Fladones, for instance, are only mentioned once, apart from the sign lists, in the sixth-century Life of St Radegund by Venantius Fortunatus, where the saint tries to exercise humility, without offending her hosts, by eating rye or barley bread under cover of her flado. This confirms that a flado was a prestigious food, but we get more information about what kind from the sign lists: it apparently combined bread (or bread dough) with cheese, and the use of two hands in the sign suggests it was a double-crust item at this stage, despite the fact that the word flado eventually developed into ‘flan’ in English and other languages.

Torta means literally ‘twisted’, but gives rise to words like Torte and tortilla in modern European languages. The fact that a torta was made of rye means it was not a very high-status kind of bread, and being divided into quarters suggests it was of a fairly substantial size, although visual and archaeological evidence shows early medieval loaves as quite small. Some loaves carbonised when a house burnt down in eleventh-century Ipswich measured about 4 inches across, probably about 6 inches before the fire.

Tortula is a diminutive of torta, and this one definitely was small. According to the Vulgate, when the Israelites found manna in the desert, it looked like tortulae to them. The sign suggests it was marked with a criss-cross pattern. or maybe baked on a grid. 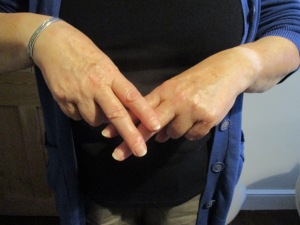 The sign for the tortula, bread with some kind of a crisscross pattern

Perhaps surprisingly, only one list has a sign for the communion bread. This is the longest list, from Hirsau in Germany, which provides both a general sign for unleavened bread, and one for a ‘biggish wafer’. We are left to wonder how a monk would have asked for a small one.

‘When you want to have bread, then you put your two thumbs together, and your two index fingers in front, one against the other.’

That’s not very clear, but the Cluny bread sign is more self-explanatory (see below for the Latin):

The other signs for bread and baked goods in the Cluny list are as follows:

And these are the two extra signs from William of Hirsau’s list (late 11th century):

The sign for a (communion) wafer — is this one of the ‘biggish’ wafers?

Signs in their original languages:

The other Cluny signs:

And from William of Hirsau:

We’d like to thank the Latin Therapy group in the Department of History and Philosophy of Science, University of Cambridge, for their help with translation and interpretation (and consumption), and especially Dr C. D. Preston for tracking down the five principal feasts.

If you want to know more about monastic sign language in the early middle ages:

All the lists are discussed in their wider, especially theological, context, by Scott G. Bruce, Silence and Sign Language in Medieval Monasticism: The Cluniac Tradition c. 900–1200, Cambridge University Press, 2007.

3 thoughts on “‘To keep silent, according to the Rule’s command …’: Bread in Sign Language”