Give Us This Day Our Daily Bread

Nowadays, if it weren’t for toast and the sandwich, bread would be fairly peripheral to most of modern eating. In modern England and the United States, bread in its unadorned form has been relegated to the little restaurant basket of slices that comes while you’re waiting for the “real” meal. This forms a sharp contrast to the place of bread in human history. For the last ten thousand years or so, bread has been central to life in the West. Life was unimaginable without bread, and in many ways life was organized around it: producing it, giving it, eating it, and thinking about it. And even if the restaurant bread basket is now neglected, the centrality of bread in centuries past has determined the shape of modern life in innumerable ways.

Our project, the Early English Bread Project, aims to illuminate early English culture by shedding light on a period in which bread was central to human life and culture. We will be looking at one of the least explored parts of bread history: bread in English culture of the Anglo-Saxon period, roughly from the years 450-1100 CE (formerly known as AD). Of course our project includes the culinary aspects of bread — grains, planting, grinding, rising, condiments — but above all it explores bread as a cultural force.

Among the questions we’ll be addressing are: how did the preference for white over brown bread (prevalent in English-speaking culture until the 1980s, and still a force in the larger world) come about, when white bread was so much harder to achieve?   How did bread reflect status? How much of women’s lives were occupied with bread production? How often was bread baked, and how? What did you do if you didn’t have an oven? How did you make sure the darn thing rose? In fact, did it rise? What shape was a loaf? What did you put on it? Is it true that you can’t have bread without beer? What did a meal look like? Is it true that angels delivered bread? And that must have been pretty fabulous bread, right? What does angelic bread look like?   Is bread magical? Exactly how many ways is it magical? How does the getting of bread affect the landscape, trade, the organization of life? What about early English bread is much the same today, and what about it is very different? 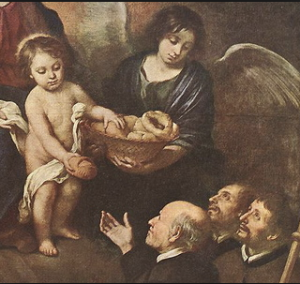 Not an Anglo-Saxon angel, but he/she does have bread for the toddler Jesus to distribute

In sum, we are asking three questions about bread: What was it like? What did it do? And what did it mean?

Some of these questions are important for an understanding of Anglo-Saxon culture as a whole; some of them are merely interesting. We will tackle both the important and the interesting. Above all, bread was at the centre of a web of both social practice and moral meaning.   We will be studying bread in a 360-degree context, drawing on sources of many types. Questions of cultivation, landscape, and nutrition will rely on archaeology and paleobotany, deploying new techniques like isotope analysis. Evidence of labour and eating appear in a range of documents: law texts, wills, narrative, and church records. Literary and visual sources also reveal the role of bread in the thinking of the early English. Perhaps surprisingly, the Lives of saints are a particularly rich source of thought about bread.   Place-names show where cereals were grown and processed, and reveal changes in the environment, such as the change from home-based, women-powered hand grinding to centralised, lord-controlled water mills.  Both the literal landscape and the cultural landscape reflect the culture of bread that got its start in this early period.

Do join us for more on all these things. Plus, of course, recipes.